The 2019-2020 Opera and Ballet Season will open with Don Carlo: in continuation with the previous openings, Myung-Whun Chung will carry on with his interpretation of Verdi’s works. With direction by Robert Carsen, three interpreters will have their debut in the performance: Piero Pretti, Alex Esposito and Julian Kim. This will be followed by Pinocchio by the composer Pierangelo Valtinoni from Vicenza, one of the most frequently performed living composers worldwide, and the twentieth-century diptych A Hand of Bridge by Barber and Bluebeard’s Castle by Bartòk. In addition to the revivals of La traviata and Il trovatore, Verdi’s so-called ‘popular trilogy’ will be completed with the Italian première of a production of Rigoletto, with production by Damiano Michieletto. The programme continues with Vivaldi’s Farnace, conducted by Diego Fasolis. As regards the French repertory, Bizet’s Carmen will be revived, conducted by Myung-Whun Chung, with Varduhi Abrahamyan and Francesco Meli. Two operas that have not been performed in La Fenice for years will also return: firstly, Händel’s Rinaldo with the historic production by Pier Luigi Pizzi, which was reconstructed to pay homage to the maestro who, with this very production initiated the start of an important phase in the rediscovery of Baroque music in 1985; secondly, Donizetti’s Roberto Devereux with direction by Alfonso Antoniozzi. Another première is foreseen for the Venetian Opera House with the diptych including Salieri’s Prima la musica e poi le parole and Mozart’s Der Schauspieldirektor, once again in collaboration with the Academy of Fine Arts. The Opera Giovani foresees La serva padrona by Pergolesi and the first modern-day Italian performance of Duse, John Neumeier’s choreographic fantasy. The programme is completed with the great repertory ‘classics’ that will be staged in their historical productions for the Fenice: L’elisir d’amore by Donizetti – with Celso Albelo as Nemorino –, Il barbiere di Siviglia and La cambiale di matrimonio by Rossini, and Aida by Verdi with Piero Pretti who debuts as Radamès.

On the two hundred and fiftieth anniversary of the birth of Ludwig van Beethoven, it is his music that will be one of the key themes of the 2019-2020 Symphony Season. A complete overview of the Bonn born composer’s works will be guaranteed thanks to the performance at La Fenice and Malibran of almost all his symphonies, the Choral Fantasy, the Coriolan overture, Le creature di Prometeo and two Concertos for pianoforte and orchestra. Alongside the regulars invited to La Fenice, other important conductors will have their debut, including Alpesh Chauhan, who will conduct the opening concert, followed by Claus Peter Flor at La Fenice with the Italiana and Riforma Symphonies by Felix Mendelssohn Bartholdy; Daniel Cohen, with Beethoven’s Fourth and Seventh Symphony; Hartmut Haenchen with Beethoven’s Ninth; Rudolf Buchbinder in the double role of conductor and solo pianist; finally, Ton Koopman, who will link Beethoven’s music with that of Johann Sebastian Bach, another key point of the new Season, marking the two hundred and seventieth anniversary of his death. Prestigious debuts rival those of much-awaited returns, first and foremost that of Myung-Whun Chung, with his multiyear project of interpreting Gustav Mahler’s works: after the Fifth in 2017 and the Second in 2019, the maestro will now conduct the Ninth and Third Symphony. Other returning names include Federico Maria Sardelli with Beethoven, and Marco Angius with the Pastoral, Wolfgang Amadeus Mozart’s Jupiter Symphony, and the Intermezzo for Mozart’s Idomeneo by Richard Strauss. The programme includes the traditional date of the Christmas Concert in the Basilica of Saint Mark, with the Choir of the Cappella Marciana under the guidance of Marco Gemmani; the Fenice Choir will sing Alfred Schnittke’s Requiem and the motet “Jesu, meine Freude” by Bach, conducted by Claudio Marino Moretti. The Dresden Staatskapelle – guests this Season – will perform Antonín Dvořák’s Eighth Symphony and Johannes Brahms Fourth, conducted by Myung-Whun Chung. Chung will also conduct the orchestra and choir of Teatro La Fenice for the seventeenth edition of the New Year’s Concert at Teatro La Fenice. Last but not least, the “Nuova musica alla Fenice” project will be renewed thanks to support from Fondazione Amici della Fenice; once again, three overtures by young composers will have their world première.
The 2019-2020 Opera and Ballet season comprises over one hundred and fifty performances, from 24 November 2019 to 20 October 2020, with twelve new productions and eight revivals. The symphony programme has increased, with thirteen concerts and eleven repeat performances, from 12 October 2019 to 15 June 2020. 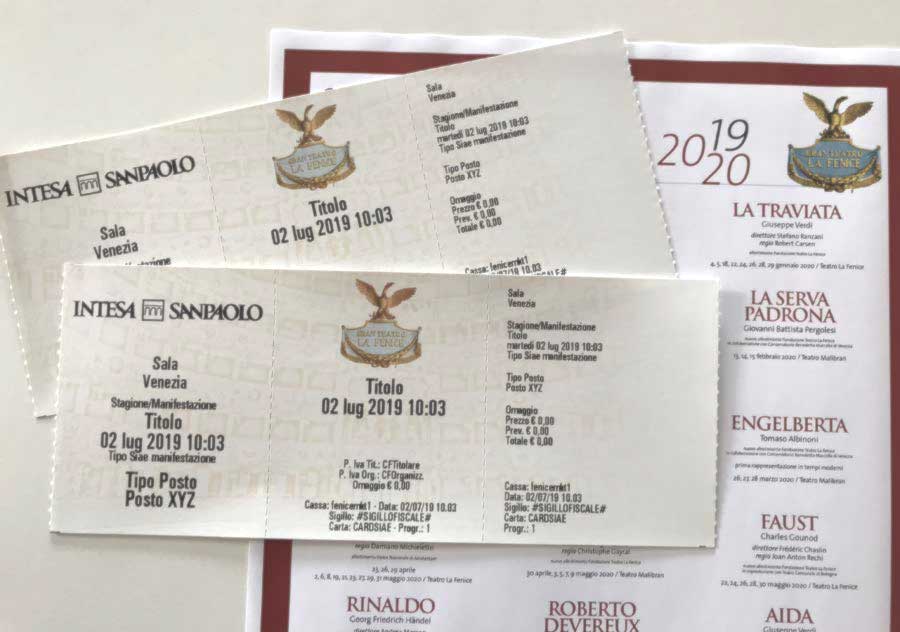